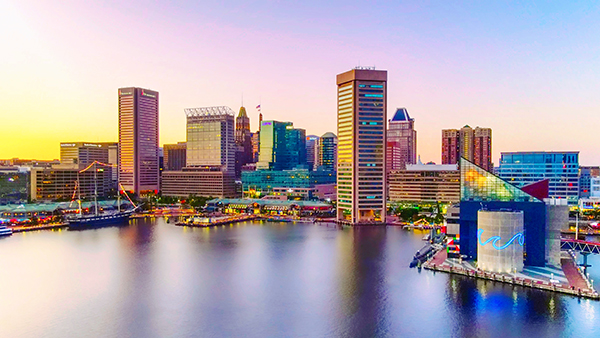 Whatever your point of reference for Baltimore – crows and orioles, steamed crabs or the site of many John Waters films (including Hairspray) – this close neighbor of Washington, DC, has potential for investment that you might not have considered.

Historically, Baltimore is where “The Star-Spangled Banner” was written during a siege of Fort McHenry during the War of 1812. Since then, its eclectic neighborhoods, unique style, culinary traditions and blend of manufacturing, finance, commercial real estate, technology and other employment sectors have earned it the nickname “Charm City”.

Like everywhere else, this has been a terrific market for property investment. Some investors have struggled to find properties (which has been a challenge for everyone in the industry), but with the help of local experts and advisers, opportunities still exist. Forecasts are also very positive heading into 2022.

Where are the opportunities?

When it comes to analyzing Baltimore for investment opportunities, many investors want to know which neighborhood, area, region they should consider. The answer is that it is very complex, and every area holds promise for improvement, new business and renewal. Even within a very small two-block radius, there might well be a group of investors working together to bring about change. Overall, the city market is strong and robust.

That said, the significant price appreciation has emboldened those who want to hold on to rental properties instead of flipping them quickly. They buy the property at a higher price. And maybe after the investment to restore it, they don’t see the profit they expected from a quick sale.

The idea is that if they can generate cash flow on the property and if lenders like Trius Lending Partners can help refinance the short-term loan and into a 30-year fixed loan at a low rate, this model of rental starts to make sense. . It may not be a quick ride, but they will see appreciation and rental income. It is a state of mind and a change that is happening in the region.

An interesting aspect of this market is that unlike major cities such as Washington, DC or New York, Baltimore does not have huge market fluctuations. The ups and downs are more subtle, which is positive for the market.

According to the Baltimore Development Corporation:

“The city is home to 13 colleges and universities, including Johns Hopkins and the internationally renowned University of Maryland-Baltimore. Professional sports teams, historical and cultural resources, and major employers in healthcare, information and cybersecurity, finance and banking, hospitality and entertainment also inhabit the city.

“More than 60 federal agencies and research labs are within a 30-mile radius, bringing substantial federal spending and jobs to the city. Johns Hopkins Hospital and University is the largest recipient of federal research funds nationwide. Baltimore also has two state-of-the-art biotechnology business parks and numerous other business and industrial parks.

The Baltimore metropolitan area, which includes the city of Baltimore and several surrounding counties, has grown from 2.6 million in 2000 to 2.8 million today. During the same period, the population of the state of Maryland grew from 5.2 million to 6.2 million.

Due to its proximity to Washington, DC, home to federal agencies including the Social Security Administration and Centers for Medicare and Medicaid Services, Baltimore is home to more than 10,000 federal government jobs. Other major employment sectors include the private sector (265,000), state government (34,000), education and health services (100,000), and construction/manufacturing (21,000).

The total civilian workforce is 1.2 million. More than 100,000 commuters outside the zone.

Housing prices in many parts of the city are within reach of many families and are significantly lower than those in many surrounding counties and the Washington, DC market, making Baltimore attractive to potential new residents.

Why Baltimore Stands Out From Other Cities

A differentiator between Baltimore and other cities is that it has a lower barrier to entry for investors than cities like New York, Miami, Austin, and Dallas. Some recently graduated investors started buying individual properties five years ago, and now they’re buying more. They can’t do that in big cities. That’s what makes Baltimore so valuable in this area: first, it’s attractive to investors because of its affordability, and second, as noted earlier, there’s still a strong rental market.

Baltimore sometimes makes headlines for the wrong reasons, plagued by many of the same challenges faced by other medium and large cities in the United States. Certainly, the pandemic has not helped.

And yet, the charms of Baltimore remain. It will still be located near the beautiful and rich Chesapeake Bay, with immediate access to Washington, DC; New York; Philadelphia Cream; and the entire Mid-Atlantic region.

Not so long ago, Baltimore and its inner harbor were a national model of urban renewal and redevelopment. The downtown design and footprint of the Camden Yards baseball stadium has been replicated in towns across the county. There is every reason to believe, from an investment perspective, that Baltimore will regain this leadership position. Investors who get involved today will stand to benefit more.

Josh Shein is a home finance expert with nearly 20 years of lending experience. He is a partner of Trius Lending Partners, a private lender, which helps real estate investors access direct financing for the purchase, renovation or new construction of single-family, multi-family and mixed-use properties throughout Central India. Atlantic including Maryland, Delaware, Virginia and DC

Shein brings a range of entrepreneurial and corporate expertise, holding senior positions at the top 10 national lenders. He is frequently requested by national and trade media to provide insight into mortgage industry trends and legislation, and has been repeatedly selected to the “Hot 100” list by Mortgage Professional America (MPA).